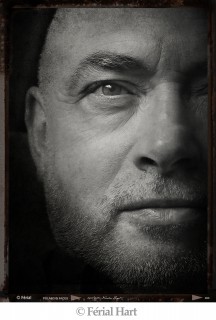 Throughout his many activities, he shares his in depth knowledge of contemporary Asian cultures as well as his long-lasting companionship with comics.

Nicolas Finet began his professional career in written journalism at the beginning of the 1980’s. Formed in daily press (La Presse de la Manche, France-Soir), he decided very early on to work as a free-lance reporter. A choice which led him to nourish many collaborations, with no initial specialty, but with a strong predilection for certain subjects such as cultural news, images of all nature and the Far-East.

This eclectic trajectory led him to experience diverse editorial functions. He has been the editor-in chief of Max, a monthly journal, since 1989. In the same year he created Angoulême, Le magazine, an official review of The Angoulême International Comics Festival. In 1995 he was the editorial adviser and chief editor of Lettre d’Europe, a cultural bi-monthly report on the French presidency of the European Union.

Additionally to written journalism, he also experienced other media forms, such as television (he presided during one season as an editorial coordinator) and the Internet, where, beginning in 1999, he conceived and coordinated a legal website, signed a literary column during two years and participated in investigations on Asia for a website dedicated to tourism.

In 1995, Nicolas Finet created N2 The Emerging Side, a news agency specialized in the coverage of Eastern Asian, which provides original and exclusive editorial content (studies, investigations, books, reports, photography, etc.) to a media, editorial, institutional and corporate-based clientele. At the end of the 90’s, this agency starts to develop recurring qualitative studies in Asia and Europe on assignment for french market research companies such as Louis Harris and Ipsos. This activity is still going on today.

Throughout the years 2000-2010, Nicolas Finet synthesized his knowledge of Asia and his expertise in comics with new occupations. He was put in charge of the Asian sector for The Angoulême International Comics Festival, initiated the translation of Korean and Chinese comic-books for many francophone publishing houses, led conferences and readings on comics in Seoul, Paris, Hong Kong, Saint-Petersburg, Guangzhou, Jakarta and Taichung and carried out the commission of the first edition of the Exposition universelle de la bande dessinée (World comic fair) presented in January 2007 at the Angoulême Festival.

In 2008, he became the publication director and one of the main authors of DicoManga, the first encyclopedia dictionary on Japanese comics, published by Fleurus, and created a series of conferences devoted to the history of Japanese graphic narration with the Ecole européenne supérieure de l’image (EESI) of Angoulême. In 2009, Nicolas Finet was commissioner of two exhibits: the exhibit dedicated to the Korean publishing house Sai Comics at the 36th Angoulême International Comics Festival and the exhibition Chine II presented by the 16th comic book festival in Bastia. He also directed the postscript of Ari Folman and David Polonsky’s comic inspired by the film Waltz with Bashir and wrote the texts for the book Secrets Défense, based on Michelle Auboiron’s paintings.

In 2010, after having been one of the commissioners of the collective exhibit at the Angoulême festival on Russian comics, Nicolas Finet wrote the preface for the unfinished anthology of Kazuhiko Miyaya’s L’Éveil and participated, as a consultant on China, in the exhibition Cent pour cent bande dessinée presented at the Cité internationale de la bande dessinée et de l’image, for which he wrote the notes assigned to China, Korea and Japan. In April of 2010, with the release of Luc Besson’s film The Extraordinary Adventures of Adèle Blanc-Sec, he wrote Le Livre d’Adèle with Tardi, a reminiscence and portrait of his famous heroine.

In 2011, he was one of the principal contributors of the collective work 1001 Comics You Must Read Before You Die, published in Great Britain by Cassell Illustrated, and the next year carried out the coordination of the French edition of this work, published by Flammarion with the title Les 1001 BD qu’il faut avoir lues dans sa vie. In 2013, he was one of the three writers of the city guide Seoul published in three languages (French, English, Korean) by Louis Vuitton. The same year, with the release of the movie Snowpiercer by Korean director Bong Joon-ho, inspired by the French comic book Le Transperceneige by Lob, Rochette and Legrand, he wrote the album Histoires du Transperceneige and then, in January 2014, wrote the foreword of San Mao le petit vagabond by Zhang Leping, a classic Chinese comic strip published for the first time in French-speaking countries.

During the 41st edition of the Angouleme International Comics Festival, having became the curator of this major event, Nicolas Finet carried out the commission of Tardi et la Grande Guerre, an ambitious exhibition dedicated to Jacques Tardi’s works on 1st World War, and then in January 2015 carried out again the commission of Jirô Taniguchi, l’homme qui rêve, the first big retrospective dedicated in Europe to this major Japanese artist.

Abruptly fired from the Angoulême International Comics Festival by the general delegate of this organization, in october 2016, Nicolas Finet goes on working for the comics industry in several directions : editorial projects both traditionnal and digital, comics translations, international event management.

In 2018, he is comics editor for Rue de l’échiquier publishing company, develops asian-oriented projects for Petit à Petit publishing house and signs a new edition of his memorial book about (À Suivre), related to the 40th anniversary of this prominent french comics magazine. He is also running lectures for the École européenne supérieure de l’image (manga history and graphic novels), is sitting on the bande dessinée committee for the Centre national du livre (CNL) until February 2019 and works on several documentary projects.

In 2019, he is the publisher of his film Mississippi Ramblin’ – On the tracks of Robert Johnson in the Deep South, a documentary dedicated to Mezzo and Dupont’s musical american trip inspired by their graphic novel Love in vain (Glénat, 2014). Two of his books, as a writer, are published almost simultaneously : a comic book about the Woodstock festival story, Forever Woodstock (artwork by Christopher) and an essay about David Bowie, Starman.

In 2020, three years after having been fired from the Angoulême Festival by its general delegate, Nicolas Finet is back in the comics events management through a close and fruitful cooperation with the LyonBD Festival : he will be curating an international and collective exhibition called “Eruptions”, due to happen in 2021. In September 2020 is released his book Love Me Please – Une histoire de Janis Joplin (artwork by Christopher, published by Marabulles), to be translated in the United States in Spring 2021, and two months later he is the editor and the co-writer of a collective book about David Bowie, David Bowie en BD (published by Petit à Petit).

HiBaNa, behind the scenes of a manga magazine (Angoulême, 2016)